I am Tokyo Sampomaster who runs this site.
In addition to holding hiking events around Tokyo, I also organize running and eating events.
Hiking Meetup
Running Meetup 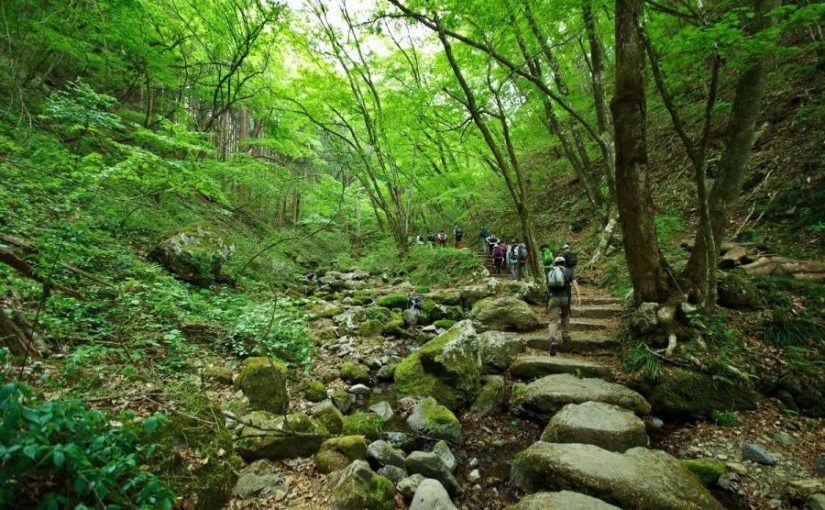 Mt. Mitake (929 m), along with Mount Takao in the western part of Tokyo, is visited by many climbers as a mountain that can be climbed by a cable car.

You can enjoy the rich nature through the four seasons, and it is also known that Musasabi is inhabited.

On the top of the mountain is a Shukubo village run by Musashi-Mitake Shrine. The hiking trails are maintained and you can enjoy easy walking.

Difficulty of this hiking:

Ome Line Mitake Station at 9:00 am

• Warm clothes and gloves and hat

Waiver of Liability/Disclaimer: Please read before signing up for this event.

These organizers are not professional hikers or trained leaders and are not medically trained to handle emergencies. Hiking is an inherently dangerous activity that can lead to serious injuries including but not limited fall injuries, poison oak. By participation in this event/hike you agree to not hold these organizers liable for any harm that may come to you, or your property. Always remember to let the event organizer know if you are leaving the group. Stay on the trail, never hike alone and use your own common sense.

Please fill out below form. 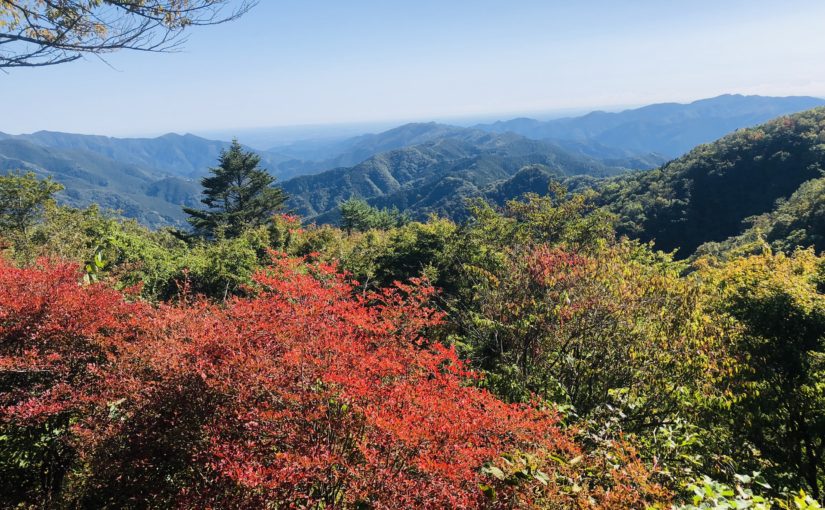 This event is a hiking for “Hosawa Waterfall” selected as “100 waterfalls in Japan” and “Asama Ridge” where you can enjoy walking ridges for novice hikers with little up / down.

Asama ridge is the season when Katakuri (dogtooth violets) blooms just this season.
Also, because it is cherry blossom season, you may be able to watch them at the same time if you are lucky.
https://www.at-roadside.com/drive/metropolitan/sengenrei3.html

In addition, the Asama Ridge is an important road from old times, called Koshu way, which connects both countries of Bushu and Koshu, in the Edo period was a road for an important life for charcoal transport.

Difficulty of this hiking:

The meeting place is Musashi-itsukaichi Station on JR Itsukaichi Line, meeting time is 8: 34 am.

The departure time of the bus is 9: 00 am.
The return bus is scheduled for 14: 55 pm.
※ The schedule may change, please be forewarned.

The area around the waterfall is slippery, you can enjoy safer hiking if you bring steigeisen.

• Warm clothes and gloves and hat

Waiver of Liability/Disclaimer: Please read before signing up for this event.

These organizers are not professional hikers or trained leaders and are not medically trained to handle emergencies. Hiking is an inherently dangerous activity that can lead to serious injuries including but not limited fall injuries, poison oak. By participation in this event/hike you agree to not hold these organizers liable for any harm that may come to you, or your property. Always remember to let the event organizer know if you are leaving the group. Stay on the trail, never hike alone and use your own common sense.

Please reserve this event from the following Meetups. 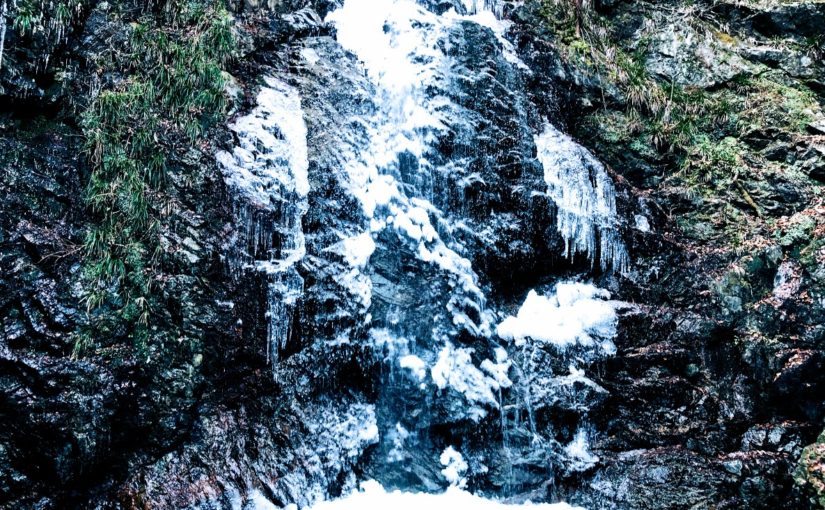 The hiking course of Sengen ridge (Sengen-one, 浅間尾根) offers beautiful mountain views and Hosawa waterfall. You can access to this trailhead for about 1 hours and a half from Shinjuku station.   This trail was an important road from old times, called Koshu way (甲州道), which connects both countries of Bushu (武州) and Koshu (甲州), in the Edo period was a track for an important life for transporting charcoal. Let’s relax and enjoy hike while thinking of old time people in the clear air which hard to believe you’re still in Tokyo.

Please refer to the following for detailed access method.

In Case of Coming by Car

In Case of Using Train and Bus

A Map of Sengen Ridge Hiking Route (include Hosawa Waterfall)

The source of above the three maps are “Digital Japan Web System” of The Geospatial Information Authority of Japan. The maps were edited a author of this blog.
In Japanese: これらの3枚の地図は国土地理院の電子国土Webシステムから配信されたものをこのブログの著者が加工したものである。

A sign above the road next to left side of the Tofu shop (檜原とうふ ちとせ屋) reads “Hosawa Waterfall” (Howasa no taki, 払沢の滝). Following this sign, go to the narrow road a little bit further on. To get to the waterfall, veer left at a fork a few minutes later onto a dirt path also marked for Hosawa waterfall, though with a simplified first character (払沢の滝). The waterfall is 5-10 minutes along this high rocky path, which crosses several small bridges. In winter, parts of the 60-meter fall and most of the pool at the bottom freeze over, and the icicles hanging off the face make for a splendid sight.

After visitting the waterfall, return to the previous junction, turn hard left in the direction of Sengen Ridge (Sengen-one, 浅間尾根). This path merges with a dirt road, which you follow uphill to the large bitumen road and bear left. The trail leaves and rejoins this road several times over the next kilometer or so, and passes many old wooden houses.
A few minutes further on, at the sign for “Zizaka Pass, Sengen Peak” (時坂峠 浅間嶺), take the steps up to the left. Rejoin the road 10 minutes later, again heading uphill to the left. The path (similarly signposted) resumes sharply to the left after about 10 more minutes. From here it zigzags up the hill, crossing the road (at a similar sign) after 5 minutes.
The Path soon bend left (near a tiny shrine), and begins to trace the line of Sengen Ridge, merging with the dirt road that enters from the left after 5-10 minutes.

Walking for 7 minutes or so will bring you to a magnificent old farmhouse, rustic sheds, and a water supply system consisting of lengths of bamboo split in half to form open pipes, which are joined together and connected to a nearby stream. This was a soba noodle shop until 2018, but unfortunately closed down now.
Ascend steeply for 30-40 minutes, first next to small stream and past rock pools, and latter through a forest with broad-leaved magnolia trees (and where orange fungi used in a herbal cancer treatment can be fond). There are also many wildflowers at various times of the year, such as summer yamayuri (gold-banded lily).

The map board provides some history of the area, as follows:

KANTŌ COMMUNITY ROADS
Historical Path
The 8 kilometer route from Kami-Kawanori to Honjuku leads up in the direction of Sengen Ridge and traverses Jizaka Pass. Passing through the middle the Hinohara-mura area and tracing the comparatively moderate lie of the land, Sengen-one Road, also called Naka-Kōshū Road, has form olden times been an important traffic thoroughfare. During the Edo priod, it was an important route for hauling charcoal by horse and for the transport of daily necessities. Besides the village folk, people from Ogouchi and Saihara also used the trail.

Another interesting feature of this area is the presence of the Japanese macaque, which descend in winter from the cold upper reaches of the surrounding mountains to these slopes. They are quite shy and more likely to be sighted on the southern side of the ridge.

There is a descend slope on the left side of the map board. After few meters on this slope there are the signposted junction. Turn left as fallow marked “Kazehari-touge and Hembori Bus Stop” (風張峠・人里バス停).
After 5 more minutes you go straight through another T-junction. From here, simply follow the Hembori (人里) signs for about 25 minutes, keeping with an adjacent bamboo stand, to a concrete road near some tea plantations. You take this road down past a few houses to the main road. Hembori bus stop is immediately to your right.

The bus ride to Musashi-Isukaichi Station takes about 45 minutes, and the fare is 820 JPY. To return to Shinjuku Station, in any case follow in reverse the instructions provided in bellow article for this walk. 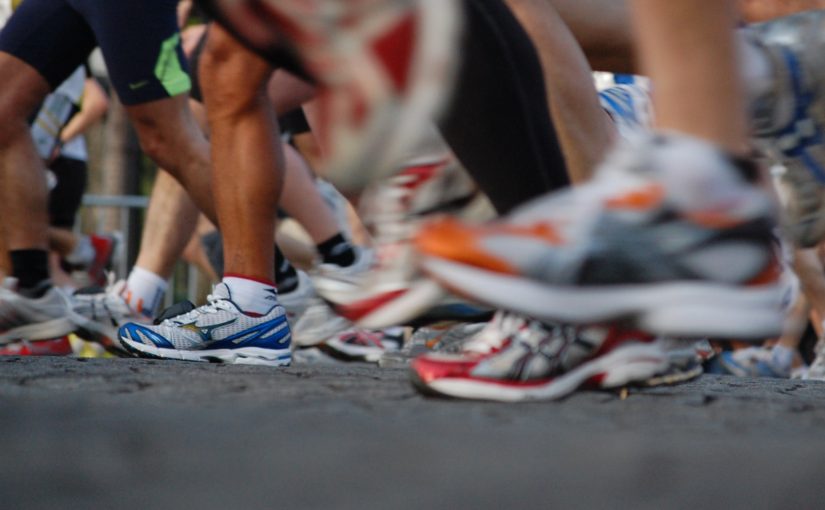 This tournament is already sold out.
The next entry is supposed to start around November 2019.

When confirming the traveling route, please use the following service. 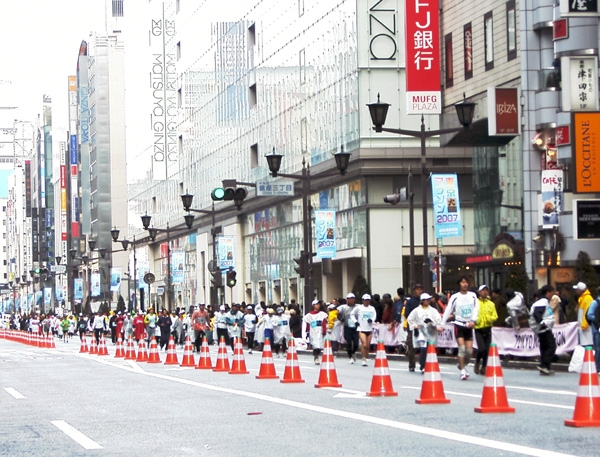 This tournament is already sold out.
The next entry is supposed to start around August 2019.
Please use the personal computer or smartphone and apply from the official website below.
https://www.marathon.tokyo/

This tournament is a full marathon convention to be held in Tokyo City, Japan.

Summary: This is an inquiry window on traffic guidance etc.

Summary: This is an inquiry window on the Tokyo Marathon.

Summary: This is the point of contact for inquiries regarding charity runners and donations.

Summary: This is an inquiry contact for volunteers of the Tokyo Marathon Foundation.

Summary: This is the inquiry window on the Tokyo Marathon Foundation official club “ONE TOKYO”. 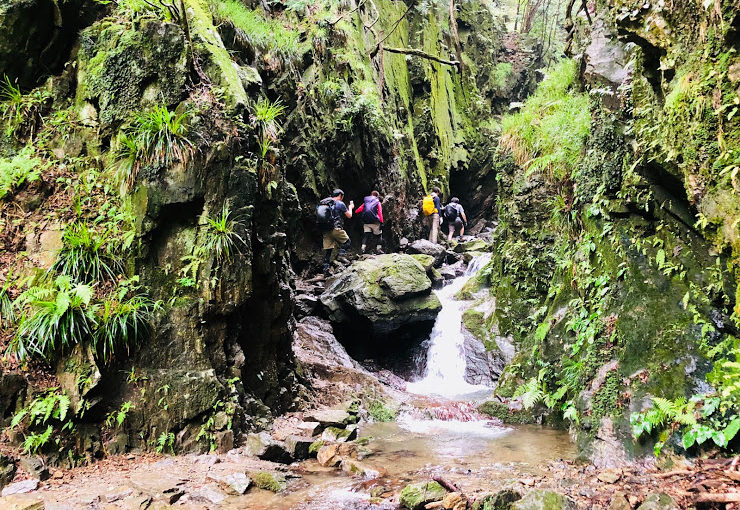 Sometimes there are buses that only go to the Kamihinata | 上日向 bus stop three stops before Seitoubashi | 清東橋 bus stop. 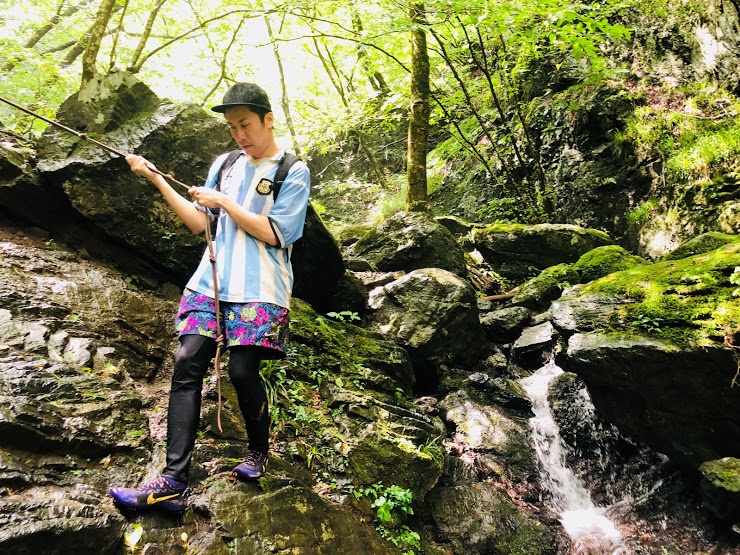 It takes about two hours by train and bus from Shinjuku to this course, but it is worth it.
Because “Shirayasawa valley” which can enjoy beautiful valley and waterfall is included in the course.
Furthermore, the goal of this hiking course is a hot spring so you can relax and go home with natural hot water.
Of course it depends on you whether you enter a hot spring or not.

The altitude of Mt. Bonore is 969 m and it is located at the prefecture border between Tokyo and Saitama prefecture.
The first half of the hiking course starts from about 400 altitudes and climbs this mountain at once.
The second half of the hiking course goes down the beautiful valley called Shirayatani.
When the valley trail is over, you can enjoy magnificent views of the Arima Dam.
Valley is slippery, sometimes you can put your feet on water so let’s go wearing climbing shoes that are hard to slip.
It rained on the summit of the mountain, it was very slippery, so the ride time was around 4 and a half hours. 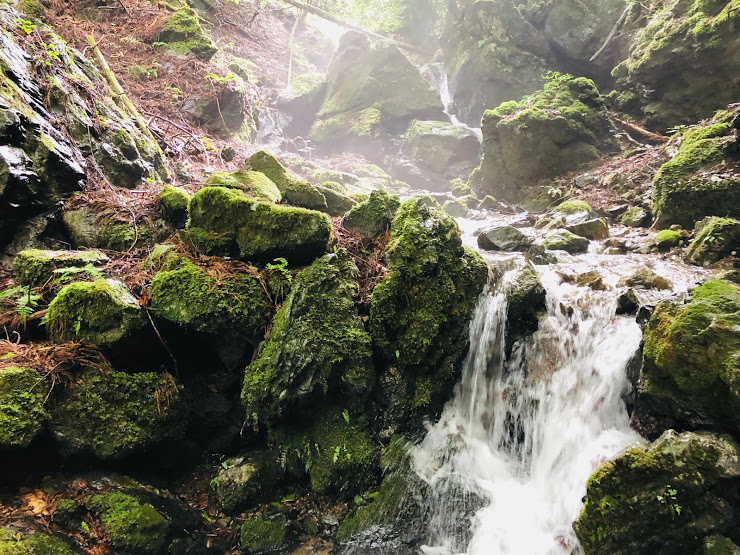 • Trekking Poles (if you use them) 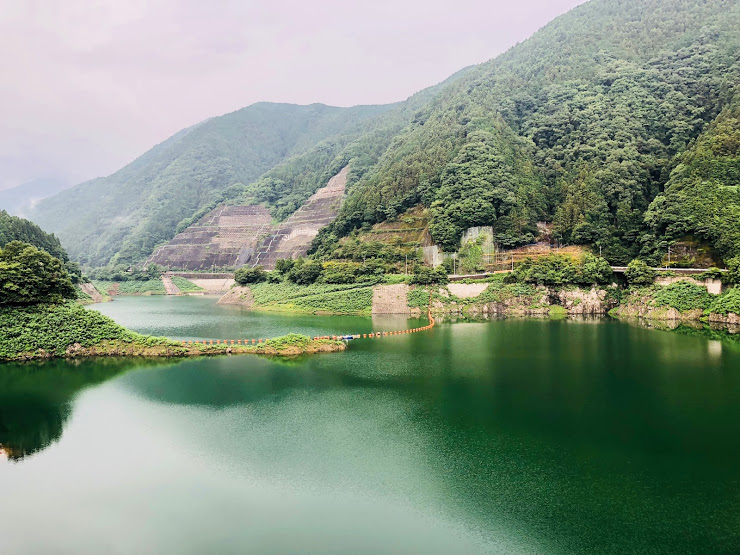 SCHEDULE FOR THIS DAY:

Map of the hiking course 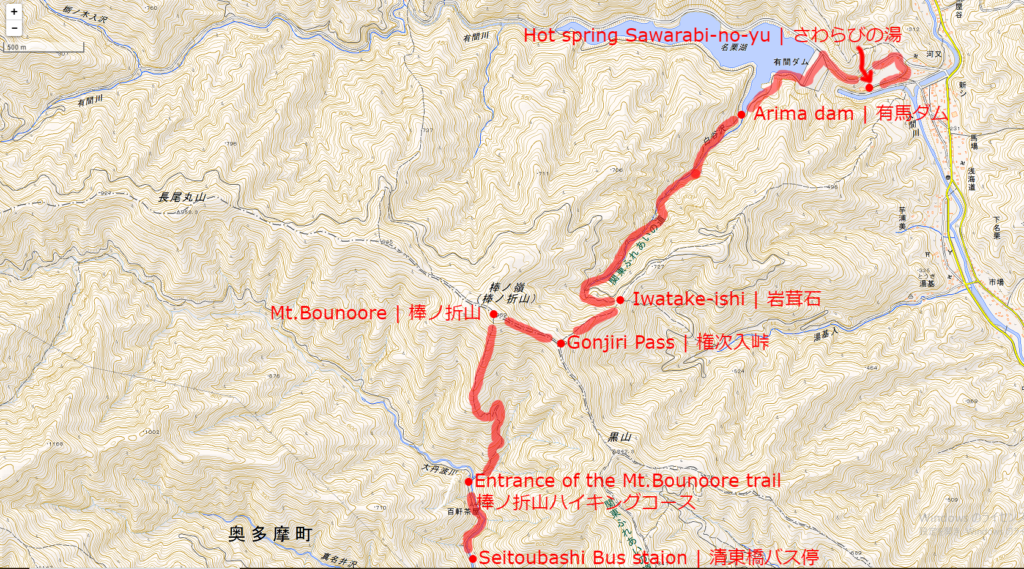 ↑Click the image to open a map expanded with new tab↑

There is a hot spring on the goal of this hike.
The name of this hot spring is “Sawarabi-no-yu | さわらびの湯”.
Bathing fee is 800 yen, you can enjoy outdoor bath and various types of bathtub.
If you go into a hot spring and relax and go home, I recommend you take clothes. 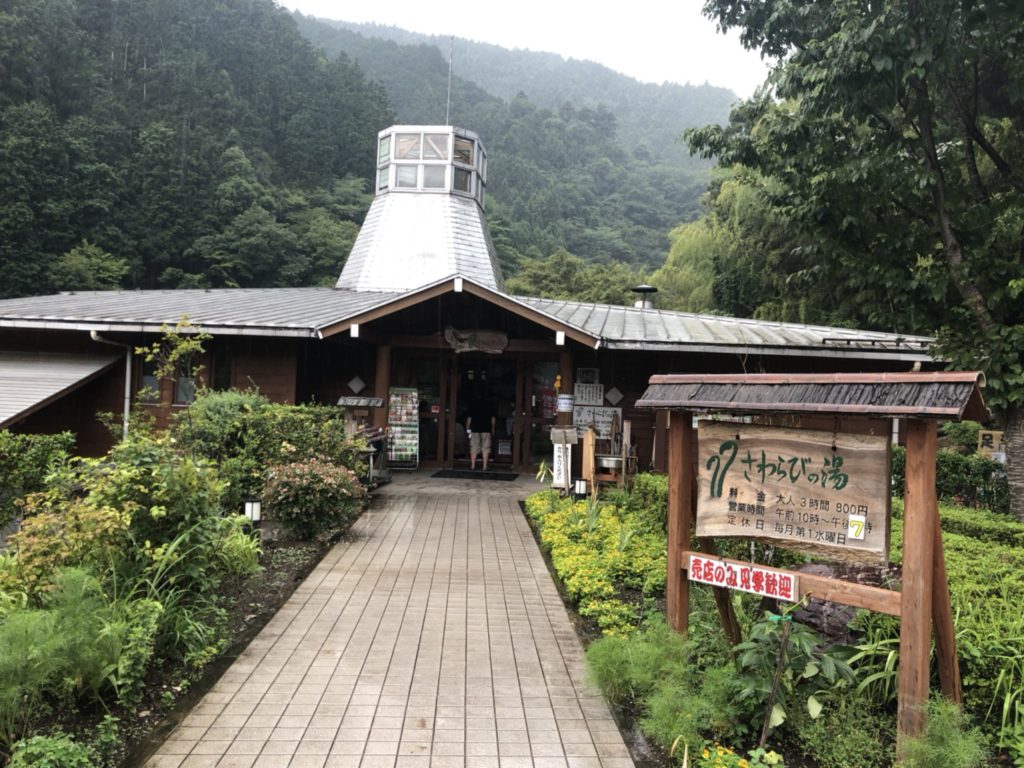 If you are looking for tour guide of this hiking course please refer to the following.